It's a weird looking insect and you could be forgiven for thinking it doesn’t look in the least bit scary.

A tiny dot half the size of your little finger-nail with 6 teensy legs near its head. To be honest - it’s highly unlikely Hollywood would ever consider making a block-buster with the title "Tick Dundee” or “Tickman” or “Teenage Mutant Ninja Ticks”.

Which is a pity because when it comes to killer Aussie predators…the Paralysis Tick is right up there alongside our poisonous snakes and killer spiders. 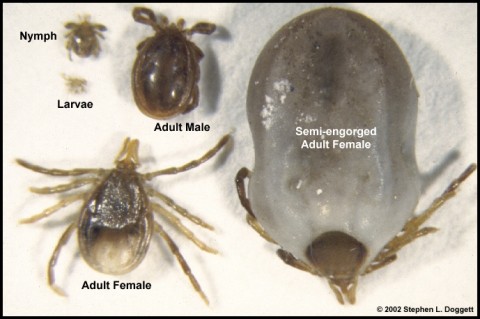 Every year around 80,000 Tick-affected pets are rushed to the vet by their worried human companions where, sadly, despite the best efforts of veterinary staff, several thousand, mostly dogs never make it home.

That’s a shocking tally for such an innocuous looking insect…and it’s worth noting Tick poison can also affect humans.  Dozens of Australia's early settlers, mostly toddlers were killed after being bitten by Paralysis Ticks and as recently as 1998 a man on the NSW Central Coast suffered a severe allergic reaction to the tick's toxin and subsequently died.

However, the most frequent victims of Ticks are pets living in a twenty kilometer corridor down the east coast of Australia,  which is like a vast ‘hunting ground’ of Ixodes Holocyclus – the official name for Paralysis Ticks – which require successive meals of blood to progress through its life-cycle.

To be fair, the Paralysis Tick is more of an opportunist than a hunter as it doesn’t actually attack its victims, instead, it climbs up the nearest strand of grass or tree branch and waits for something to brush past them. They don't care if it's a dog, cat, horse, cow or even a human…they jump on and immediately start sucking blood.

Unfortunately the Tick’s saliva contains a deadly toxin which will progressively paralyse the host, and as the Tick gorges and becomes engorged with blood, its victim will start to feel the toxin’s effect and demonstrate some distinctive symptoms.

Initially, you might notice a change in the pet’s meow or bark, their breathing might sound more labored and they might stop eating or vomit.   This is followed soon after by weakness in their legs, usually the back legs get wobbly as the paralyzing toxin works its way forwards.

If left untreated, the pet will undoubtedly stop breathing and die.   (Even with treatment, many Tick victims will need to stay in hospital to be carefully monitored and often require breathing assistance.)

Speed is crucial when a pet owner suspects their pet is being affected by a Tick.   Go straight to your nearest Vet who can confirm a diagnosis and administer a Tick Anti-venom.

If you ever have to witness this – as we have – it’s important to realise that Vets see and treat Tick poisoning all the time.   They can’t give a guarantee of success, it really does depend on how many ticks are on the pet, and how long they’ve been injecting their saliva into your pet.

We were among the lucky ones.   Our little gal, Kismet pulled through and we cut our Coastal holiday short to return to our Tick-free home environment, with a warning to keep her cool and calm and should we ever consider returning to a known tick area to carry out daily finger-tip searches of her fur. (We’d used a Tick spot-on but didn’t check for the sneaky Tick which was found under her ear flap).

GOOD NEWS
Commercial products to try to keep pets safe from Ticks used to involve fortnightly applications of product, with the risk they might wash off.   They also took two weeks to become effective – which meant that spontaneous trips to ‘The Tick Zone’ aka the beach – were a little like playing Russian roulette.

In 2015 dog owners learned of several new products to counter this deadly parasite.

A monthly chewable tablet, a collar which repels Ticks for 3 months and most recently another chewable tablet – this one controlling both Paralysis Ticks and Fleas for 3 months.   No danger of the product washing off and requiring only days to become effective rather than weeks.

No more Russian roulette.  No more visiting the Eastern Seaboard and ‘hoping’ your pet won’t pick up a Paralysis Tick.

As usual, the best products are ‘vet only’ so ask your Vet which of these will be best for you and your pet depending on their breed and your current or desired lifestyle.

And breathe easier knowing your precious pet is getting the best protection possible.